Minnesota Man Stuns The World By His 75$ Chevy Truck

Sure it may quite seem insane coming to know the fact that Bob Sportel from Prinsburg, Minnesota brought a 1957 Chevrolet pickup truck in 1976 for just $75 expecting it last for no more than 4 years.

Surprisingly the deal he thought, was expensive for him back then almost lasted him for 38 years. Sportel who retired from his work recently at prinsberg farmer’s co-op is still excited about this old Chevy Pickup Truck. His work was his major concern which leads him in purchasing this 1957 Chevy Pickup Truck. His friends often ridicule him by saying that they need to get away from his way, once they see Bob coming in his old and rusty pickup truck.

Almost everyone gets picky when it comes to introducing a new beast in their routine. Bob wanted something to cover up the one-mile distance to his work and his search halted when he brought this Chevy truck from a customer for 75$.

According to Bob, the amount seemed more to him 38 years back and bargained for 70$ but ended up buying it for 75$. The estimated price of such pickup trucks these days is nearly 40,000$. Bob Sportel quite nailed it in just 75$.

The Chevy truck that he expected to last for just a few years kept working and so he kept driving it until he retired after almost 38 years. Everyone around him who comes to know about his pickup truck is quite amazed by its performance.

Bob has even stated that in the entire 38 years he hasn’t spent more than 1000$ for the pickup truck. The odometer of the truck was already broken when he had brought the truck, but according to him, he has driven nearly 300,000 miles in the Chevy truck.

He changes the truck oil four times a year and he still hasn’t changed the originally featured paint of the pickup truck. The truck over years has become quite rusty and has got duct tape all around the seat but Bob still finds it a quite splendid truck despite the absurd comments from people. 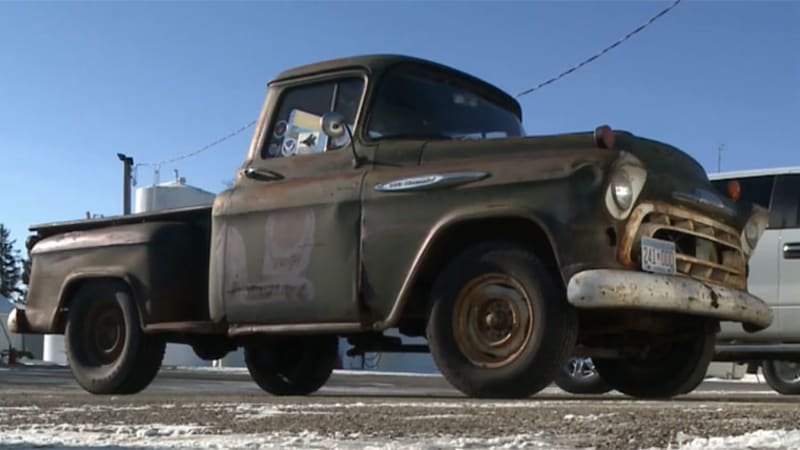 His wife has often tried convincing him to buy something new but Bob is just not in the mood to let go of his precious possession. And now nearly after 38 years, it’s not just a pickup truck for him. Bob has lots of memories linked to his soul with the chevy truck and as per him; it is now like a part of his family.

The truck not only holds a special connection with him but to his entire family. It’s so close to their hearts that his daughter didn’t even mind going for prom in this pickup cart.

Bob Sportel’s story is quite touching and inspiring at the same time. Seemingly even after his retirement, this splendid beast will forever be a part of his family. Hearing his story everyone gets an urge to look at their cars with same admiration.

Man Smacks His Car And Lands On a Roof Top