Lamborghini Murcielago is the high performance car which is owned by wealth people and is driven by enthusiastic drivers. It is like a dream coming true when it comes to driving a Lamborghini.  When you are in the beautiful ride, you would feel that you are the centre of attraction for the people around the road.

The car is really a dream as it is not just a simple car which can be owned by anyone, its market value is around $450000. When we think about the performance of the car, it is surely a high speed car and you may not be able to stop yourself from driving at the high speeds.

There are these two ladies, not ladies but the two grandmas namely Peggy and Audrey. These two were so lucky that they got a chance to drive the Lamborghini Murcielago.

It was like a dream coming true for both of them as none of the grannies may have thought that they would drive the super fast car at this age. However, the dream came true and they were about to drive the best of the cars that are currently available in the market. 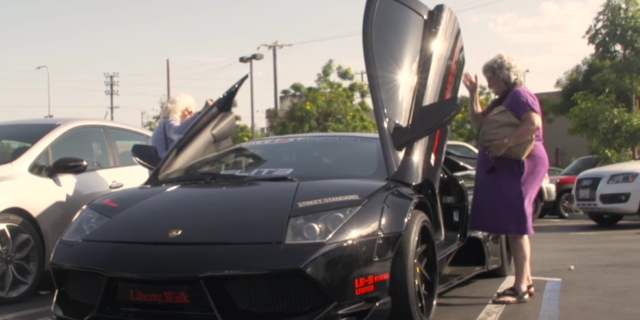 As it was the first time when both of the grannies may have got a chance to drive a Lamborghini, there were some initial issues that they faced. Peggy, after starting the car, faced issues in shifting the gear of the car to take a reverse.

It was all new technology and it’s obvious that she was going to go through the hassle, but it was just a matter of some time. Peggy then found the reverse gear and then the journey started. She took the car in reverse direction and they were about to leave.

Both the grandmas were so excited about the ride that they started waving their hands to the people nearby and at the same time the people were surprised to see both the old ladies in the car. 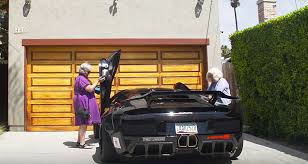 The reactions of the people around were incredible. The people who saw these two grannies in the car they were confused as they may not have seen such scenario in their entire life. The hot and sexy racing car, it is mostly driven by the young and energetic drivers but this time they saw something different and it was hard to accept the fact for the people.

Some were smiling and they were wishing good luck to both the grannies for their ride. One of the viewers was so happy to see this incident that he immediately clicked a picture of the scene so that he can show it to the world, he wanted to show how dreams can come true!

The incident is really a special moment for all the old ones out there as the two grannies had proved that there is no age limit to fulfill your dreams. If you have passion then you can do things at any stage of your life. The excitement of the grannies and their happiness, when we read about this incident, it can bring smiles for us.

Find Your Heroes In The All New Sustomized Scania